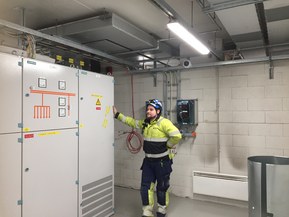 The Länsimetro runs on power supplied via Lapp Connecto’s busbars

The first phase of construction of the Länsimetro (Western Metro) began in November 2009. Eight new stations, from Lauttasaari to Matinkylä, were built in the City of Espoo, extending the connected City of Helsinki metro line by 28 kilometres. The new section was completed in eight years and opened to passenger traffic in November 2017.bu

In the second phase of the Länsimetro’s construction, the line is being extended by a further seven kilometres and five new stations: Finnoo, Kaitaa, Soukka, Espoonlahti and Kivenlahti. In addition, a new underground metro depot is being built in Sammalvuori. By April 2021, 89 % of the new construction had been completed. The current estimate is that passenger traffic from Matinkylä to Kivenlahti will start during 2023.

One kilometre of busbars

1000 metres of Lapp Connecto's domestic MJ-1600A busbars have been installed at six high-voltage substations under contract to Electric Power Finland Oy (EPF). Thus, these systems supply electricity to the metro trains, as the substation transformers are connected to the switchgear.

The air-insulated MJ busbars were dimensioned by EPF and Lapp Connecto together, were manufactured at the Lapp Connecto plant in Hyvinkää and were installed by EPF. Lapp Connecto has also supplied busbars for the metro station and underground depot power transformers.

Overheard at the construction site

Jarmo Kaunisto - Installation Manager at Electric Power Finland: “We have normally dimensioned all of these together with Antti, with great success. Not a single item has been wasted.”

Antti Uitti – Department Head at Lapp Connecto: “We started working together in phase 1 and now we’re in phase 2. Over the long-term, this cooperation has been outstanding!”