Electricity for car charging stations via a busbar trunking system 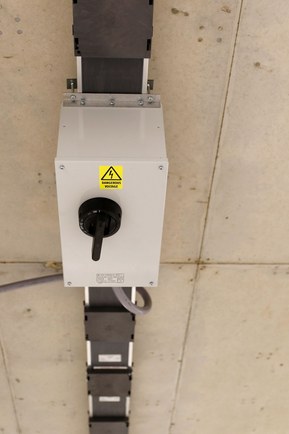 Electricity for car charging stations via a busbar trunking system

There is a new building in Matinkylä, Espoo. It has several underground floors for parking, for the metro users, and customers of the new Hotel Matts as well as the swimming pool, which will be built in the near future. The Tynnyripuisto parking was opened for public in February 2021.

The new building is quite ecological and energy efficient, as the garage has automatic lights. When walking along the hall, the lights are switched on automatically only when needed. This is just one part that makes the building ecological. Another one is that there are electric car charging stations on every floor of the parking garage. The charging points are on the hall walls, and if you look towards the ceiling by a charging point, you can see the Lapp Connecto busbar trunking system. At each individual charging point, the busbars have tap-off units.

In this building, the pending amendment to article 126 of the land use and building act (maankäyttö- ja rakennuslaki) has been taken into account in advance. Once passed, in the future the amendment will also determine obligations on the number of car charging points and charging point capacities in new locations and extensively renovated parking garages. The proposed law would also contribute to the implementation of the amended directive on energy performance of buildings. It is estimated to effect the number of charging points in Finland to be approximately 73,000 to 97,000 by the year 2030.

- Our customer, PKS Talotekniikka Oy was in contact with us from the very beginning of the project. Thus, we were able to design a cost-effective and flexible busbar trunking system together. The system will also be easy to expand to new charging stations in the future, Samuli reminds.

- The cooperation with Lapp Connect has been excellent, Joni Vuohtoniemi from PKS Talotekniikka Oy concludes.

If you would like to know more about our solutions, please ask Samuli directly at samuli.savolainen@lappgroup.com or tel. 020 764 8337.