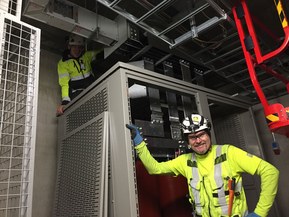 Have you heard of Lapp Connecto’s key role in the continuing story of the Helsinki Olympic Stadium?

In the opinion of some, Helsinki’s Olympic Stadium is the most beautiful in the world. The clean lines of its functionalist style originated from a 1930s architectural competition won by Finnish architects, Yrjö Lindegren and Toivo Jäntti. Construction began on 12 February, 1934, and the Stadium was inaugurated on 12 June, 1938, just in time for the planned (but aborted) Olympics of 1940.

Some 80 years later, in 2016-2020 the Stadium was completely renovated, under the supervision of Finland’s National Board of Antiquities, into a multi-purpose arena that fully meets current international standards in serving both the general public and event organizers.

This included a complete renewal of the electrical systems, everything from 10 kV systems to all telecommunication systems. – In the A and M blocks of the main building, i.e. in the sports museum’s premises, special requirements and needs of the National Board of Antiquities had to be taken into account on a daily basis. In the new and other blocks, normal methods could be used, tells Roope Mutenia, Project Manager of Assemblin Oy.

Lapp Connecto’s role in this exceptionally large and demanding project was to deliver Italian PT-2000 compact busbars for the dry transformers contracted by Assemblin Oy. A total of five substations were delivered, with eight installed busbars.

“It was definitely due to our common history and previous projects. We knew that things work at Lapp Connecto, and that they are a reliable partner. Everything was delivered as agreed. There can be no risk of failure in this type of project,” answered Roope.

“It’s true,” confirmed Antti, “we have a long history together. It’s great to be able to continue it!”